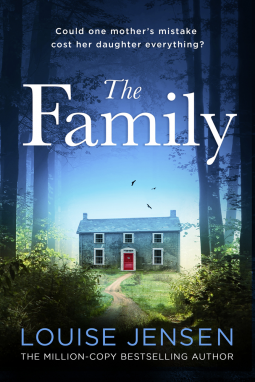 Genre:         Psychological Thriller
Publisher:  HQ (Harper Collins)
Published:  3rd October 2019
Reviewed:  2nd September 2019
Blurb
ONCE YOU’RE IN, THEY’LL NEVER LET YOU LEAVE.
Laura is grieving after the sudden death of her husband. Struggling to cope emotionally and financially, Laura is grateful when a local community, Oak Leaf Organics, offer her and her 17-year-old daughter Tilly a home.
But as Laura and Tilly settle into life with their new ‘family’, sinister things begin to happen. When one of the community dies in suspicious circumstances Laura wants to leave but Tilly, enthralled by the charismatic leader, Alex, refuses to go.
Desperately searching for a way to save her daughter, Laura uncovers a horrifying secret but Alex and his family aren’t the only ones with something to hide. Just as Laura has been digging into their past, they’ve been digging into hers and she discovers the terrifying reason they invited her and Tilly in, and why they’ll never let them leave…
My Review
Laura has reached rock bottom. Her husband, Gavin, has been killed in an accident on a building site, and due to Gavin building on toxic land, the community she was once a part of have turned against her in her hour of need. Customers to her once flourishing flower shop are now virtually non-existent and Laura isn’t able to pay her rent. To top it all, the insurance company is refusing to pay-out until further investigations into Gavin’s death have been carried out. With her parents disowning her for something Laura has done in the past, the only people Laura and her daughter, Tilly, can rely on are Gavin’s brother and his family. But now, even they are refusing to help, so when Saffron shows Laura kindness and offers her a way out, Laura takes Saffron up on her offer. But, as Laura says, things come in threes, and this was her first mistake. Her second mistake was taking Tilly with her. Both of these mistakes come very early on in the story and I couldn’t turn the pages quick enough to find out what the third mistake would be.
With a chilling prologue that immediately draws you in, the narrative continues from three points of view: the first person perspectives of Laura and Tilly, and the third-person limited perspective of Alex. It is from Tilly’s perspective that we learn Gavin was keeping secrets: ‘don’t tell Tilly.’ As far as Laura is concerned, Gavin was the love of her life, so what secret did he hide from her? As well as being caught in the middle of her father’s secret, Tilly is having a rough time of things at school. She’d always been best friends with her cousin, Rhiannon, but with the school bully isolating Tilly whilst at the same time drawing Rhiannon into the ‘in’ crowd, vulnerable Tilly soon becomes susceptible to Alex’s attention.
Handsome and charismatic Alex is the person who runs the ‘organic farm’, and has both Laura and Tilly under his spell. By giving him his own voice, the author allows the reader a glimpse into both his warped mind as well as the painful past that has shaped the man he has become. However, by switching to third-person, this allows a degree of distance and juxtaposes Alex’s perspective with the closer first-person perspectives of Laura and Tilly; leaving the reader in no doubt as to who to route for.
The middle part of the story centres around life on Oak Leaf Farm itself: the set-up, the others who live there. It is this part of the story that I found darker and much more creepy than the author’s other novels. Although, it was made clear that Laura could leave at any time, the sense of isolation from the rest of the world, both physically as well as mentally, made it feel this wasn’t possible. I just couldn’t put the book down here; I had to read on and get Laura and Tilly out of there!
The latter part of the narrative is where the strands of Laura’s past and present really come together; and it isn’t until now that the novel’s title really takes on its true meaning. I was sure I was right about the fate of one of the characters but OMG I didn’t see that one coming– what a twist that was! If you think life on the farm is dark and creepy, that ending will send shivers down your spine…
As well as her well-plotted storylines, what I like about this author is her unique writing style. Sentences are clean and uncluttered; and whilst rich in vivid imagery, the narrative isn’t over flowery. Louise Jensen says what needs saying, then gets out; resulting in a fast-paced and heart-pounding experience for the reader.
I absolutely loved The Family; yet another fantastic read from Louise Jensen. I would recommend this book for fans of Lisa Jewell, Jane Schemilt, and Jo Ullah.
Thank you to the author, publisher, and NetGalley
for an Advance Review Copy of this book
in return for an honest and unbiased review.
About the Author

When I was little I was obsessed by Enid Blyton. Her characters were so real to me they became my friends. I often huddled under my covers, stifling my yawns and straining my eyes, as I read ‘just one more page’ by torchlight.
Mr Townsend, my primary school English teacher always encouraged my love of literature, and it wasn’t long before I’d read everything my school had to offer. The first book I created was six pages long, had stick-man illustrations and was sellotaped together. I was immensely proud of it. Writing was a huge part of my life, until one day it wasn’t.
I can’t remember ever making a conscious decision to stop writing but it became easier to act on the advice I was given – ‘grow up and get a proper job’ – and my dreams were tightly packed away, gathering dust for the next twenty years.
My thirties were a car crash. Literally. I sustained injuries which when coupled with a pre-existing condition forced me to radically change my lifestyle. I felt utterly lost and utterly alone. Always an avid reader I began to devour books at an alarming rate. ‘You’ll have read every book in here soon,’ my local librarian said. ‘You’ll have to write your own.’
And there was a flicker, a shift, a rising of hope. I grasped that nugget of possibility and I wrote. I wrote when I was happy. I wrote when I was sad. I wrote when I was scared and in-between writing, I read, read and read some more. Words have the power to lift, to heal. They have illuminated my world, which for a time became very dark.
As Anne Frank said ‘I can shake off everything as I write; my sorrows disappear, my courage is reborn.’
http://www.louisejensen.co.uk/about
https://www.amazon.co.uk/dp/0008330107?_encoding=UTF8&isInIframe=0&n=266239&ref_=dp_proddesc_0&s=books&showDetailProductDesc=1#product-description_feature_div
https://www.waterstones.com/book/the-family/louise-jensen/9780008330101

I'm Callie and a bookaholic. I love reading psychological thrillers and women's contemporary fiction. I'm currently in the third year of an English Literature degree with the Open University, and now this is coming to an end I am excited to be starting a new career as a novelist myself. I've set up literaturelove.co.uk not only to share my reviews for all the great books I get to read in my job as a book blogger, but also to share some of my own short stories as well as my journey as a new writer. So grab yourself a coffee and come and join me in my love of all things literature. Callie x View all posts by Literature Love